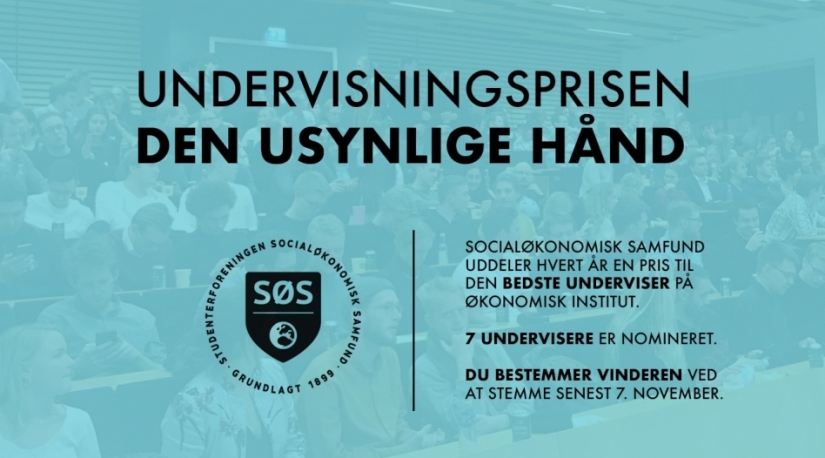 Based on the students’ nominations, 7 lecturers have been nominated for the award “Den Usynlige Hånd”. Until Thursday the 7th of November you can vote for the candidate that you believe deserves the prize the most.

“Den Usynlige Hånd” (The Invisible Hand) is awarded by the students to a lecturer at the department of Economics at the University of Copenhagen, who has demonstrated extraordinary abilities with regards to teaching/lecturing.

SøS (Socialøkonomisk Samfund) established the award in 2000 to give students a chance to acknowledge talented lecturers in a way that’s visible to a wider audience.

Based on the nominations that SøS has received over the past couple of weeks, and in collaboration with the study committee at the Department of Economics, we have singled out a handful of lecturers, who will enter the final round of the nominations.

In order to find this year’s winner of “Den Usynlige Hånd”, we need your help. Therefore, a poll is published on https://forms.gle/XSW9LBthmYmGsTP57, so that you as a student are able to vote for one of the 7 lecturers mentioned below who you believe deserves the prize the most. The winner will be honoured for one’s talented work with regards to teaching, and will be announced on Tuesday the 12th of November.

We sincerely hope that you will help us select the best lecturer at the department of Economics.

The nominated lecturers are as follows: