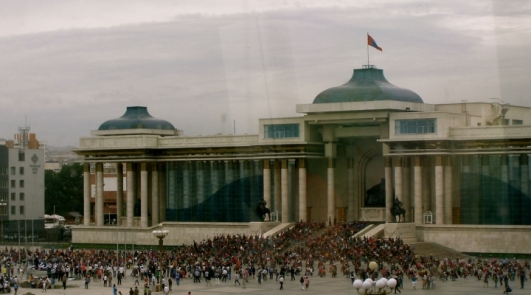 MONGOLIAN MINING BOOM OR GLOOM? For those who don't know much about Mongolia, this is where you can get the latest feedbacks from a person who hasn't been home for the past 2.5 years. Welcome to "Minegolia".

Mongolia is the 19th biggest country with only 2.7 million people (UN 2010), making us the most sparsely populated country in the world. You need 36 Denmarks to fill up a territory of Mongolia. It has billions of dollars’ worth of untapped mineral deposits of copper, gold, uranium and coal reserves; and for many years we were called “the beggars sitting on a huge pile of gold”. But with the recent inception of several big mining projects (Oyu Tolgoi and Tavan Tolgoi to name the biggest), a transformation is on the horizon. The IMF projected a double-digit annual growth rate for years to come; and a quadrupling of GDP per head – currently only $2,000 - by 2018.

However few doubt that the boom is coming. Fears of resource curse, Dutch disease, and corruption are prevailing at the hearts of all Mongolians. Unfortunately, countries with abundant natural resources, does not necessarily boom. On the contrary, most tend to have less economic growth and less development than those with fewer natural resources. This happens when a country starts to suffer from (1) a Dutch Disease (an appreciation of the real exchange rate as one form of resource revenues enter an economy), which handicaps the sale of other exports and impairs the ability of domestic products to compete with imports; or (2) a government’s mismanagement of resource or simply a corrupt institution. If we fail to make measures and prevention from these two factors, we will stay as the “beggars sitting on huge pile gold” permanently, because no matter how big income and profit we get in a bad institution, we will not get to see the benefits of mining boom.

Moreover it is important to note that 68.7 percent of our population is 15-64 years old, 27.3 percent are under 14, and only 4 percent are over 65 years old, which makes us relatively a young country; and for many years, Mongolia has suffered from a brain drain, where our most educated intellectuals stayed abroad, working in the higher waged countries; and had no tendency to return back to a Mongolian labour market. However, the recent mining boom might just change that.

Graduates are returning back, understanding that it is a now-or-never situation, where our future depends purely on our actions taken today regarding this mining boom. We will either end up becoming one of the tragic African countries, which suffers severely from a resource curse, or be a wealthy welfare state like Norway, Denmark, and other oil countries like Saudi Arabia, Brunei, Kuwait, Qatar, Bahrain, Oman and UAE. We are small, have such a measly population, and have the opportunity to become the next wealthy citizens of the world. It is possible, but there are so much welfare and tax reforms, and fiscal policy measures we need to make.

Honestly, I felt almost like a tourist back home in my capital city - Ulaanbaatar (some call it Ulan Bator). There were enormous amounts of new foreign and domestic companies; new trendy places; new buildings and new get-tos. I was shocked at how much can happen in 2.5 years, political-and-economics-wise. E.g.: our biggest party is split into two, and minor parties have merged together, etc. And thanks to these mining boom/gloom there are increasing amount of foreign investment banks/companies and internationals coming non-stop, and I couldn't keep up with the various new company names my friends back home where working at. It was crazy.

Besides the new get-to places, the most shocking factor for me was the prices. Even though I knew that the consumer price in China rose at the quickest pace in three years, by 5.5 percent in May from a year earlier, and sensitive food prices surging by 11.7 percent; I still didn't think Mongolia would be THAT expensive. Mongolia is an export-oriented company, we export most of our products from abroad, hence our neighbor's soaring expense would ofcourse influence us immediately; but I didn't expect it to be at all that expensive. Mongolia was almost as expensive as Denmark!

Minimum salary in Mongolia is around 200USD - I am not kidding. But the starting salaries for an undergraduates from abroad are max about 1.500-2.000USD. Nevertheless, I was surprised to see how people afforded living in Mongolia with such low salaries. Denmark has one of the highest wages in the world, and the living expense seem reasonable with the salaries they earn; but it didn't make any sense at all back in Mongolia.

Moreover, all the vacancies required a fluent English/Chinese/Russian and a diploma from a foreign university was a plus. This makes the nomadic people migrating from a rural areas a lot hard to find a job and get settled. With that being said, the gap between the rich and poor was clearly visible. I am not sure how clear I can make it, but if you're into cars, people in Mongolia ride all kinds of possible expensive cars out there, and no, we don't ride horses and camels to our school, thank you very much. But ofcourse, not everyone has the luxury of driving in a fancy car, wearing LV and Burberry and so on. This increasing gap is a common process for a sudden growing economies, but still it worried me into thinking: are we developing in a wrong way?

I've started studying at the international line at Polit (winterstarter), and currently, I am one of the two non-EU students left in the program. This 6th semester might be my last, so I am really looking forward to make the best out of it in Denmark. It has been a roller-coaster time for me at Polit and I am glad that I have met such a crazy Polit people.

It was great to be back home this summer, and I've realized that it is important for internationals to head back home once in a while to remind themselves where they come from, what their countries need and where they stand in their society. So I really hope you enjoyed reading about Mongolia and I hope in future, Polit would make a study-trip to Mongolia and get to experience the best of the two awesome worlds we offer- nomadic vs urban life. I'd be happy to give a hand and welcome you all to "Minegolia"!

Very interesting to read about Mongolia. Nice one Batzul! :-)

Oops, bits and bits of spelling mistakes here and there, but judging from the two comments above, i managed to make sense. Mange tak, Daniel og Christian!

Great article Batzul, very interesting ! So you'll be back to Mongolia in Jan?

Thanks, Valdis! Yeah most likely, around February, after finals.